Order a Book of Memories™
for Your Loved One
Learn More

We are here to help you. If you have need of our services, please call us, day or night. Or, if you prefer, you can fill out the form on the right.

Are you thinking about pre-planning your funeral? Pre-planning is the best way to choose how you're remembered, to ease the emotional and financial burden on your loved ones, to protect yourself from rising funeral costs, and to let your family know your final wishes.

In Memory of
Willie George
Dillard
1932 - 2021
Click above to light a memorial candle.
Memorial Candle Tribute From
Fountain Funeral Home
"We are honored to provide this Book of Memories to the family."
View full message >>>
Send Flowers
Plant a Tree In Memory of Your Loved One
Click Here
Menu

In the event that there is an error
in the information presented,
please contact the funeral
home by clicking here. 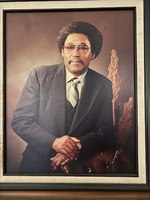 Mr. Willie George Dillard made his grand entrance to his life's journey on February 11th, 1932, in Indianola, Mississippi. On Monday, August 9th, 2021 in the comfort of his home and in the presence of his family the Lord ordained his grand departure.

George was the first child of three born to the late George Dillard and Annie Mae Dillard Birdsong. He received his formal education in Indianola, Mississippi. At the age of 17 he moved to Akron, Ohio to work in an industrial plant. In 1952 he enlisted in the US military and served in two branches; the Army and the Air Force. In 1955 he was honorably discharged and relocated to Muskegon, MI.

George's Christian experience began at a young age. He joined Beulah Missionary Baptist Church under the leadership of the late Rev. J. M. Blow. He was a true example of the biblical principle "train up a child in the way he should go, and when he is old, he will not depart from it". He was a man of character who was trustworthy and loyal to his word. His selflessness and integrity made him a wonderful friend. If he gave you a promise, you could count on it to be delivered. George was confident, and had strong opinions that he could validate based on his training and life experiences.

In 1977, George entered into holy matrimony with the love of his life, Jacquelyn Vauters Sanders. In this union they nurtured and guided their children, their extended families' children, and children that resided in the neighborhood. He instilled and frequently quoted Exodus 20:12,"Honour thy father and thy mother that thy days may be long upon the land which the LORD thy God giveth thee."

George enjoyed a variety of leisure activities. He was an avid golfer. He loved gardening and meticulously manicured his lawn. He received awards for lawn beautification. He loved to cook. His specialty was slow cooked bar-b-que spare ribs. His turkey and dressing was a must have at any holiday gathering. He was happiest when he was surrounded by his family with good food, games, and pleasant conversation.

George had a spirit of entrepreneurship and longed to own his own business. Not only did George leave a legacy of love and care for his family, he also left a legacy of hope to citizens in the community by providing employment opportunities.

George, the industrialist along with two other partners organized and managed the Dilesco Corporation. The name of the corporation represents this partnership. "O L" stood for George Dillard, "ES" stood for Bruce Essex, and "CO" stood for Robert & Betty Cope. George traveled extensively to acquire knowledge that would enable him to move the company forward. He traveled to Japan, Mexico and many cities in the United States. He intentionally participated in courses that provided certification that empowered him to be a better leader. He attended the University of Michigan, and numerous training courses from Manufacturers and Employee Association that kept him abreast of new and innovative ideas. By the time he retired in 1994,George had become one of Muskegon's most successful African-American industrialists ever.

When a man has done his best, has given his all, and in the process supplied the needs of his family and his community, then that man has succeeded!